A Journey Across the Pond

John Hanratty No Comments Yet

A Journey Across the Pond

Last month I had the opportunity to lead an educational trip to Great Britain under the auspices of Avanti Destinations and VisitBritain that was focused on exploring the food and drink of this great island nation. And did it ever deliver! Over 30 travel agents, executives, and educational trip leaders from Avanti Destinations, representatives from VisitBritain, sponsors from Rail Europe, Norwegian Airlines and press assembled in London to kick off the trip. My group of ten stayed at the Tower Hotel with great views of iconic Tower Bridge, which was spectacularly lit each evening.

The structure of the overall trip was that all participants would tour together in London and then split up to a number of unique regions of Britain. My group would ultimately travel to the cities of York, Harrogate and Edinburgh in Scotland before meeting back up in London with the two other groups on the final night of the trip. 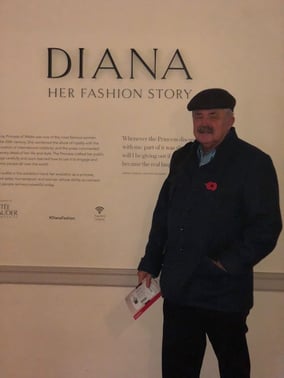 We kicked off the London portion with a private tour of the infamous Tower of London before the facility was open to the public. I had toured the Tower previously, but not with the in depth description of the history provided by a uniformed Beefeater and the private guide once in the Tower who explained the history of each of the crown jewels housed within. We did visit a number of the iconic sites after that including the Shard, the tallest building in Western Europe, and Borough Market to view the incredible variety of food for sale. Private tours later that afternoon were also conducted at the Beefeater Gin Distillery complete with tasting. Day two had us visiting Kensington Palace, viewing Princess Diana’s collection of gowns and dresses and a visit to Wisley Gardens for a sumptuous lunch where all produce we consumed was grown on site. The highlight of the London portion of the trip however was that evening where we actually dined in the House of Parliament in a historic, recently restored room. This experience is available through Avanti and is really oriented to group business. 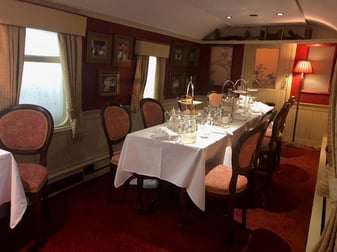 The next day my group of ten traveled from Kings Cross Station by first class rail to York where we immediately were whisked off to Harrogate approximately an hour to the west to enjoy a food tour that made five stops along the way. The highlight of that culinary adventure was the Yorkshire pudding filled with tender beef and mashed potatoes, I still can taste it! The next day we did a walking tour of York for four hours including a chocolate factory tour as York is known for its Chocolate, there is so much to see and do in this beautiful city. The afternoon was a particular treat for me as York is the home of the British Rail Museum. Train buff that I am, I was in seventh heaven walking through this immense facility and viewing historic engines and rail cars that spanned over 150 years of British rail. The culmination on the day was enjoying a private tea, complete with finger sandwiches and scones, in Queen Victoria’s private rail car.

Continuing our journey the next day we traveled again by first class rail to Edinburgh about a two hour ride with spectacular coastal scenery along the way. Upon arrival at the Bonham Hotel, truly fabulous accommodations, we were met by our guides in kilts to take a four hour walking tour of Edinburgh to end up at the top of the highest point, Edinburgh Castle, overlooking the city below and home in the summer months to the famous Military Tattoo Parade.

Continuing on our foodie bend the next morning, we experienced a local food safari where along the way we tasted scones and tea, visited a local butcher and fish monger for sampling meat and then smoked salmon and ultimately ending with a whisky tasting. In the afternoon we visited the Whisky Experience for another tasting and viewing the worlds’ largest assortment of unopened whiskys with over 3,100 unique varieties on display. The evening was dedicated to a Scottish Heritage show complete with bagpipers, dancers and singers. A fun evening.

In the morning we boarded the train to return to London to meet up with the other two groups, share our regional experiences and complete our trip in the West End that evening to enjoy the musical “Everyone’s Talking About Jamie” and home to the states the next morning. A great experience and so cool to know Avanti can provide all of this to any traveler to Great Britain. There is so much to discover outside of London which we all came to realize and enjoy.