The Irish Origins of Halloween

Jordan Rasmussen No Comments Yet

The Irish Origins of Halloween

Before kids donned costumes and traipsed across the neighborhood for trick-or-treating, the Irish celebrated the harvest festival of Samhain. Cattle were brought back from pasture, feasts were held, and communities came together to commemorate the end of summer and the beginning of the darker months. However, this festival wasn't just an acknowledgement of the passing of seasons, Samhain was an important time to honor the dead, give praise to the gods in exchange for a safe winter, and to protect from evil spirits called Púca who may terrorize the people during the night of Samhain. Bonfires were lit to protect the community, children dressed as these Púca and walked from home to home asking for offerings to placate the gods, and crude faces were carved into turnips to confuse the Púca. As Christianity spread through the Celtic world, Samhain's festivities and peculiarities began to integrate with Catholic traditions and belief. Eventually, as the Irish emigrated through North America, the harvest-time tradition of Samhain evolved into the modern-day Halloween that we all know today. 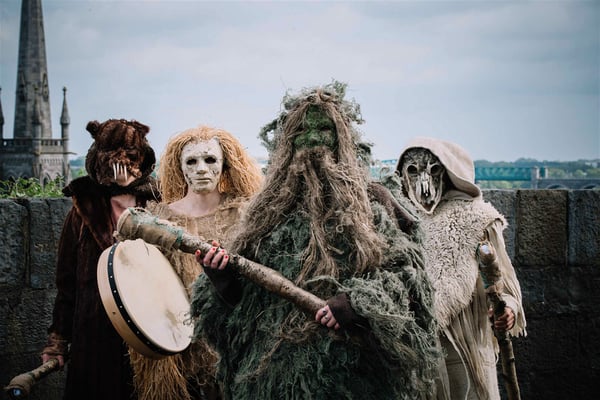 Nearly all of our beloved Halloween traditions originated with the Irish festival of Samhain and this year, the country of Ireland is celebrating this long heritage with the Púca Festival. From October 31 to November 2 along Ireland's Ancient East, the Púca Festival will celebrate this tradition through folklore, elaborate costumes, harvest-time food, classic Irish music, and spectacular lights to illuminate the ancient and distinctly Irish history of Halloween. With events taking place in County Louth and Meath, festival-goers will experience a thinning of the veil between our world and the world beyond, a time when spirits are able to traverse the bounds of reality with ease. Experience Halloween and all of its ancient history in its birthplace... if you dare!