The official start of the holiday season for Germans is on the first of four Advent Sundays. This year, it's Dec 3 and ends on Dec 24. Families gather around a decorated wreath with four candles, called "Adventskranz," and light a new candle every Sunday until all four are burning. The afternoons are an opportunity to enjoy an "Adventskaffee" (coffee) with cake or home-baked Christmas cookies.

Many of the world's most beloved seasonal traditions originate in Germany, such as the Christmas tree and the Advent Calendar. For Germans, however, nothing compares to the unique atmosphere of an authentic old Christkindlmarket in a traditional setting. 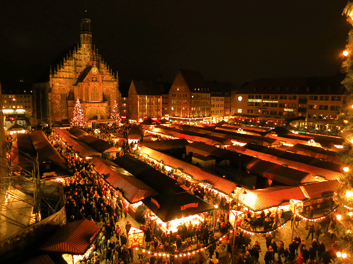 German town squares, normally dark early in winter months, are lit up and buzzing with activity during this time. Townspeople gather together, listen to brass band music, drink beer or hot mulled wine or apple cider, and enjoy the hearty traditional fare of the region. Vendors peddle baked goods, including gingerbread hearts, sugar-roasted almonds, and crepes. In the Alpine markets, St. Nikolaus is often accompanied by a scary looking hairy figure called Krampus (there are usually several of them). With a din of cowbell jangles, they dash through the markets, chasing giggling children and adults alike, swatting them with switches made of straw or twigs, and scaring some with the realization that they were naughty this year. The most common way to wish someone a merry Christmas in German is to tell them, "Frohe Weihnachten. (FRO-eh Vi-NAKT-en).

The German Christmas tree, "Tannenbaum" (yes just like the song) is traditionally put up and decorated on Christmas Eve, and will remain until Epiphany, the Feast of the Three Kings, 12 days after Christmas.

Gluehwein (glue-wine): The literal translation for Gluehwein is "glow wine;" people get warm and "glow" with the consumption of mulled wine. Traditional Gluehwein is a hot drink made with red wine, sugar, sometimes citrus, and spices including cloves, cinnamon, and cardamom.

Punsch (poonsch): Very similar, but some will be flavored with berries (beerenpunsch), peaches, or even amaretto. If you prefer to steer clear of alcohol, but still want the Weihnachtspunsch experience, no problem. it's usually available in a non-alcoholic version (often called Kinderpunsch, literally Children's Punch).

Haven't finished your holiday shopping? Advent calendars make a great gift for yourself or friends, and easy to bring home in your suitcase. Hand-painted ornaments, and wood carvings from Oberammergau are two other popular options, and you'll find them in most of the markets.

And if you have forgotten anything before leaving for home, there is even a Christmas Market with ice skating facilities at Munich's International Airport.